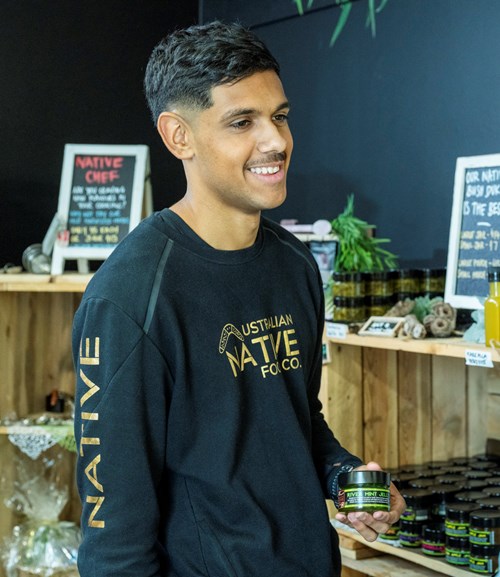 We are proud to have helped Nasiah, a participant of Workskil’s Transition to Work (TtW) program to find a job that he thrived in and loved. The interview at Australian Native Food Co was Nasiah’s first ever job interview and he aced it to land the job, and less than a year later Nasiah has now been drafted to an AFL team.

Gaining employment can be a tough and long path. With Workskil’s experience and support through the TtW program we helped guide Nasiah towards employment in the retail sector. We helped by purchasing Nasiah work clothing, assisting with transport and proof of identification. We also conducted mock interview training to ensure that he was ready and calm for the interview. Nasiah suggests “be confident, but also don’t feel afraid that you may answer questions incorrectly".

His biggest tip for other young people heading to a job interview was to “just be yourself and don’t overthink anything”. He encourages other young job-seekers to try and remain calm in the interview and to ensure that you are neat and tidy.

Nasiah was widely considered as the best kick of this year’s NAB AFL draft class, however Nasiah's ability to stay calm is yet another of the many reasons that AFL club St Kilda have welcomed him into their ranks, snapping up his talents with pick No. 11 at 2021's NAB AFL Draft. St Kilda's list manager, James Callagher stated that “Nasiah is a pure wingman with plenty of promising attributes. He has exceptional foot skills and mobility, is calm under pressure and is deceptively quick when he hits top gear.” We could not agree more, Nasiah is certainly exceptional.

We are proud to have helped Nasiah along his amazing journey, and we are certainly eager to see his long and successful career unfolds. You can read more about Nasiah's AFL career here.

Click here to see the full interview at Australian Native Food Co and here to find out more about TtW.